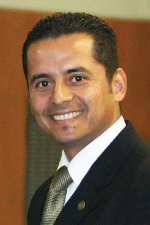 Born in Delano, California, Jorge A. Aguilar was raised in Parlier, California until he was ten years old. He then lived in Tangancícuaro, Michocán, México until he was 16-years old, at which time he returned to the United States to finish his high school education at Parlier High School.
Upon high school graduation, Aguilar attended the University of California, Berkeley where he received bachelor's degrees in Latin American Studies and Spanish and Portuguese. He then attended Loyola Law School where he received a Juris Doctor. While attending law school, Aguilar taught high school Spanish at Los Angeles Unified School District's South Gate High School. He joined the University of California's Office of the President, Relations with Schools Office, in Fresno and began working for UC Merced prior to its inauguration. In 2007, he became UC Merced's associate vice chancellor of Educational and Community Partnerships as well as a special assistant to the chancellor. In this role, Aguilar was responsible for all Student Academic Preparation and Educational Partnership (SAPEP) programs as well as connecting the intellectual, human and cultural assets of the university to educational and community priorities. Aguilar's vision was for UC Merced is to craft a distinctive vision and culture as a young campus that can set it apart as an institution of higher learning that the Central Valley calls "our university."